Let us begin by looking at two processes: one without 1×1 flow and one with 1×1 flow. The assembly process depicted below has four workstations, and one operator at each one. There are small quantities of inprocess “buffer” inventory between the workstations, as indicated by the inventory triangles (Figure 5-6). The work content each operator has per cycle is shown by the black bars of the operator balance chart.

No. Work pieces do not move from one processing step directly to the next. They pass through small buffer inventories.

Is the number of operators correct here?

No. The four operators are not fully loaded up to the planned cycle time. There are extra operators in this process.

What happens if one operator experiences a problem?

Not much. The other operators can keep working because of the buffers between the processing steps. 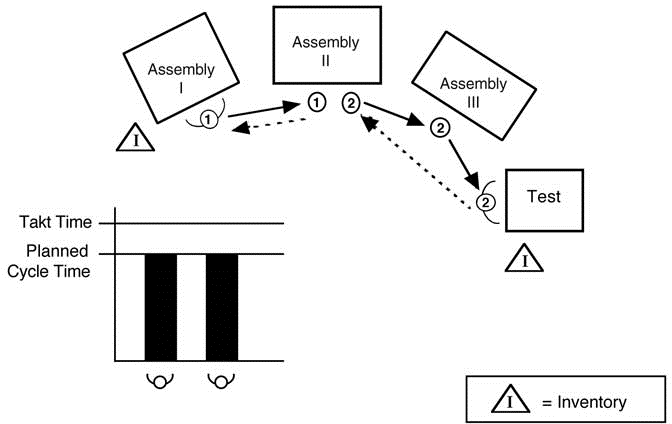 Is this process flexible?

Many of us would say yes, this process is flexible, because despite small process problems and stoppages, it can still produce the required quantity every day. With extra operators in the line, the process has the “flexibility” to work around problems and still make the target output.

Now here is the same process, but with the workstations moved a little closer together and the work content distributed in a different manner. There are now two operators who move across the workstations, as shown in Figure 5-7, and no buffers between the processing steps. Takt time and planned cycle time are the same as in the previous diagram.

Is the number of operators correct here? 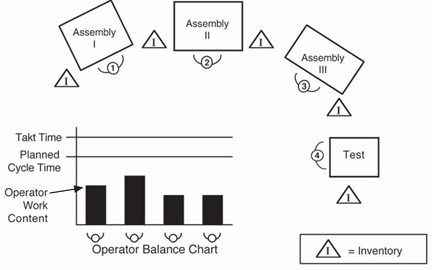 What happens if one operator experiences a problem?

The entire process will come to a stop. The other operator cannot continue working because there are no buffers between the processing steps.

The Intention Behind a 1×1 Flow

Here is a key point: of these two process configurations, the one that looks better depends upon your philosophy. If the prevailing philosophy is to “make production,” then the first process with four operators seems preferable. This process can work around problems and still make the target output, which is why you find this kind of arrangement on so many shop floors. On the other hand, at Toyota this sort of flexibility is considered negative, since problems go unresolved and the process gets into a nonimproving, firefighting cycle.

With Toyota’s philosophy of surviving by continuously improving, striving for the second configuration, a 1×1 flow, is preferable because both that striving and the 1×1 flow itself reveal obstacles and show us what to focus our attention on. A 1×1 flow is not just part of the ideal state condition, it is also a means for helping to get there.

Figure 5-8 depicts an example from a factory that makes a variety of stereo loudspeakers. The factory has three nearly identical neighboring production value streams, whose individual processes are operated in a connected FIFO fashion (FIFO = first in, first out), as shown in the simplified value stream map. Speakers are built to order, so different size speakers go through the value stream one after another. A small speaker may be followed by a large speaker, and so on.

The leadoff process involves cutting the wood panels for a speaker cabinet, one speaker at a time, on an automatic CNC machine. This process has a consistent cycle time regardless of speaker cabinet size. In the next process (Figure 5-9) an operator manually hammers threaded brass inserts into predrilled holes in the cabinet face panel.

The cycle time for this process varies greatly. A large cabinet with 18 brass inserts requires much more operator hammering time than a small cabinet that gets just eight inserts. As a result of this fluctuation, the rest of the downstream processes and operators often receive work at an uneven rate.

To compensate for this fluctuation, the downstream operators naturally walk from one value stream to assist in another, rather than idly waiting. When a set of large loudspeaker cabinet panels takes a long time to get through the brass insert process, operators step over to a neighboring value stream to assist there. Of course, this workaround is not a process improvement, and although it is done with good intention, it introduces even more fluctuation into the value streams.

What is happening here is that there is no process target condition other than “make production” or “keep the operators working,” and as a result, problems push factory operations in different directions on an ad hoc basis. What would happen instead if the process target condition included a 1×1 flow with the right number of operators at a consistent cycle time from speaker to speaker?

Now there is only one choice: be creative and develop a way to install the brass inserts with the same cycle time no matter what size cabinet is being processed. If this is done resourcefully, at low cost and complexity, it would be a true process improvement, and progress for the company. 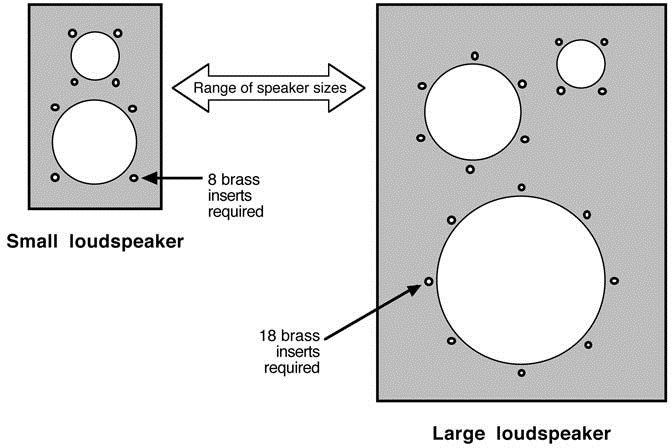 Figure 5-9. The number of brass inserts varies with loudspeaker size

As this example illustrates, a target condition is a challenge. We do not know up front how we will achieve a consistent cycle in the brassinsert process, and that is how it should be. If we knew the answer up front, we would only be in the implementation mode, as discussed in Chapter 1.

A similar and common example is assembly cells that have been designed with the intention that the cell operators will help one another when a problem occurs, rather than having a firm target condition. Say Operator A normally performs assembly steps one, two, and three, and Operator B normally performs steps four, five, and six. If Operator A gets stuck at step two, then Operator B will also pick up step three on that cycle. This self-adjusting mechanism is often considered positive, but it is actually a work-around that reveals a “make production” rather than an improvement mind-set.

At Toyota, such self-compensating flexibility in processes would strike fear in the hearts of managers because of all the problems that go unnoticed and unaddressed. Such a mode of operation would not be allowed, and would be viewed as a failure to manage the process. This does not mean, however, that Toyota would just enforce work standards and prohibit the cell operators from assisting one another. The problems the operators are experiencing are real, and we must deal with them in some way. If we’re going to strive for a consistent 1×1 flow target condition and expose problems, then we need to have a way of responding to and dealing with those problems. More on this in Chapter 7.

For a long time I misunderstood Toyota’s desire to staff processes with the correct number of operators as simply a productivity goal. Higher productivity, higher quality, and lower cost may indeed be the overall objectives. But today I see that Toyota sets target conditions that include a 1×1 flow with the correct number of operators as a means to find out what needs to be worked on step by step to achieve those objectives.

In a processing area at a Nippondenso factory in Japan (part of the Toyota group of companies), aluminum parts go directly from hot die casting to machining in a 1×1 flow—that is, with no buffer in between. This is a great achievement and a true improvement. But the important point for us to learn is not the solution, but how it was developed. Imagine the factory establishing this particular 1×1 flow as a challenging target condition and then working through the obstacles one by one for months, and perhaps even years, until they achieved it.