Improvement and adaptation are critical success factors and tend to take place at the process level. How, then, are we currently trying to improve our processes? Based on observations in many factories, I currently find these main approaches: workshops, value-stream mapping, and, above all, action-item lists.

Improvement workshops are special improvement efforts that temporarily bring together a team of people to focus on a particular process. The duration of a workshop is typically one to five days. Workshops are used extensively and do have their place. Toyota utilizes workshops too, for example, but not as its primary means of improving and adapting.

As discussed in What Defines a Company That Thrives Long Term, project-style improvement efforts only occur at any one process occasionally, not continuously, and involve a specially formed team. Thus, by definition, workshops are not at all the same as continuous improvement. In regard to workshops, it is also interesting to note that:

This highly useful tool looks at the flow of material and information, and the associated lead time, across multiple processes. However, the lead time through a value stream is an outcome that is correlated with inventory, and inventory in turn is an outcome that results from performance attributes of the individual processes in the value stream. Therefore, if you want to reduce lead time, you should improve processes.

As mentioned in the previous chapter, much of the mechanism of continuous improvement and adaptation takes place at individual processes. For example, applying the improvement kata at the process level—one level deeper than the value stream—is something you would do after drawing a value-stream map (see Figure 2-1).

Value-stream mapping is not intended to be a method for process improvement, but rather a method to help ensure that process-level improvement efforts: 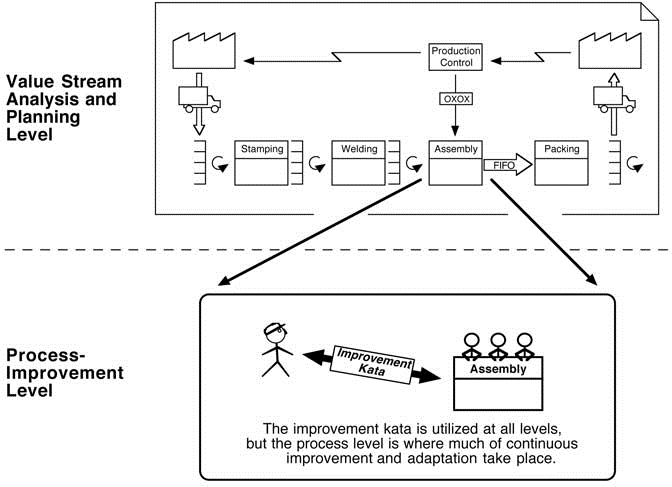 If we try to rely on value-stream mapping as a method for process improvement, then the following negative effects may arise:

It is more effective to use value-stream mapping for keeping an eye on the overall picture, and to step into the process level with the improvement kata as described in Part III.

We often hear about the relatively high number of suggestions per employee and high number of implemented suggestions at Toyota, but we are not comparing apples to apples. Toyota production operators work with a team leader who follows the improvement kata.

Within that framework, team leaders are also expected to actively obtain a certain number of suggestions from their team members. Furthermore, the team leader also helps team members fine-tune their suggestions, via mentoring, before they are submitted. This is very different from simply installing a suggestion box, so to speak, and actually has a different purpose.

Based on my observations, the action-item list is currently by far our most widely used approach for process improvement. You find managers and engineers relying on them in nearly every factory. The approach is so widespread that it needs almost no explaining, although many of us have probably not yet realized that we are using such lists as an approach. An action-item list is a listing of multiple improvement ideas and action items to be implemented at a process.

The lists are sometimes called “open points lists” and appear in various forms, such as on flip-chart sheets, cards, or on whiteboards (see Figure 2-2). The action items on the lists originate from recording process problems, brainstorming, problem-solving activities, waste walks, value-stream mapping, and so on. Although we may believe that those uptake activities—like waste walks or problem-solving activities—constitute our improvement approach, all of them merge into the same thing: a list of action items. And it is with those lists that we actually try to manage the improvement process. 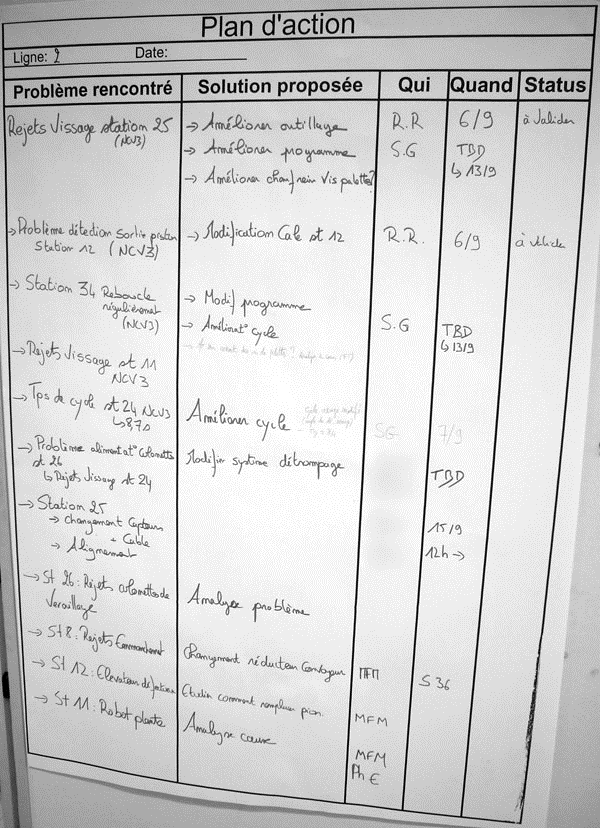 Figure 2-2. An action-item list on a factory floor in France

In short, the list approach is done as follows:

To convince yourself of the truth of these observations, this may be a good point to walk through your own factory.

What Are the Results of Working with the Action-Item List Approach?

Once you finish Part II of this book you will be able to see that the list approach is an unscientific and ineffective method for process improvement. It is in actuality a scattershot approach: multiple action items are initiated in the hope of hitting something. Although few people admit it, surprisingly little cost and quality improvement is generated via the list approach. The negligible results it produces can be observed in the lack of progress— in the wasteful and unstable processes that persist on factory floors everywhere. In many cases the scattershot list approach creates even more, not less, variability and instability in a process.

Upon closer inspection, many of the cost reductions companies talk about come from cutting resources or moving production to low-wage locations rather than truly improving the way a process operates; that is, improving how things are done. And many of the quality improvements people talk about are improvements in delivered quality, achieved by increasing inspection and sorting out more defects rather than improving the process to reduce the number of defects created.

Here’s an example of what I mean. A large auto-parts manufacturer was training four young engineers to begin work in the company’s supplier development department. As part of this training, each engineer was sent to a different supplier factory to conduct an analysis and make a report.

Interestingly, the better response by the boss would have been exactly the opposite. He would say to the three engineers: “Anyone can make a long list of things we can improve and hope that something in that list will work. Please go back, look again, and tell me just the one, two, or three things that we need to do now to begin the improvement process at the supplier site.”

It is much more difficult to see deeply and understand what we need to do.

In contrast, Toyota’s goal in process improvement is to learn; to develop an ever deeper understanding of the work process and to improve the process from that basis.

When you throw several countermeasures at a process, the problem sometimes does go away. This is often not because the causes have been discovered and eliminated, but because of the extra attention the process has received. Sometime later the same problem returns—well after the improvement success was celebrated.

Figure 2-3. The tendency is to jump right from a problem to possible solutions

The bottom line is that we are wasting a lot of time with the actionitem list approach. Yet if it is not very effective as a method for managing process improvement, why does it persist? Why do we tend to create such lists again and again?

One probable reason, already mentioned, is the erroneous feeling that the more action items we have, the more improvement we have. Another reason may be that managers find it convenient to fit the list approach and regularly scheduled reviews of action-item assignments into existing work schedules. For everyone involved, the list approach provides a way to feel engaged in improvement activity without having to alter their current work routines very much.

The list approach also provides a way to avoid receiving blame. We can say, “I completed my action items on time,” and thereby fulfill our obligations without necessarily having to generate real process improvement. The objective becomes to carry out the action items for which I am responsible, not the improvement itself. If the desired results do not come, it is not my fault, because I did what I agreed to do.

It has also been suggested to me that long lists of opportunities or action items may be regarded as a reflection of how observant or smart we are.

There Is a More Effective Way to Improve

Not only is the list-oriented improvement approach not very effective, it also makes improvement too complicated and difficult.

To see what I mean, consider that Toyota teaches people to try to change only one thing at a time, and then to check the result against the expected result. You may work on several things simultaneously, but if possible do not change more than one thing at any one time in a process. Such “single-factor experiments” are preferred because Toyota wants its people to see and understand cause and

effect, which helps to develop a deeper understanding of the work processes. Studying this Toyota improvement tactic leads to some interesting discoveries:

Yet we know that Toyota is improving faster than other companies. So what does this mean for our cycles in an only-changeone-thing-at-a-time approach?

In other words, with Toyota’s approach, we cannot wait for the next scheduled weekly or biweekly review cycle to come around. If we wait that long to check, then our progress will be too slow. By the time we do check the process, the parameters may have shifted.

We should check the results of a change as soon as possible and then, based on what we learn, consider the next steps. Unlike our current workshop and list-oriented approach to process improvement, this one does have implications for how managers, engineers, and executives slice up their work days.

Improvement is hard work, but it doesn’t have to be too complicated. After studying Toyota’s improvement kata in Part III, you are likely to call a stop to and reorient any improvement effort that relies on the list approach. Instead you will know that there is a better way to proceed and lead.