Home > Origin and Effects of Our Current Management Approach

In regard to pursuing the 1×1 flow ideal state, Toyota was clearly preceded by the Ford Motor Company, which undertook, arguably, Western manufacturing’s last focused and sustained pursuit of the contiguous flow vision early in the twentieth century. (Note that I am intentionally using the word contiguous rather than continuous.)

Everyone has heard about Ford’s 1913 moving-conveyor final assembly line for the Model T automobile at the Highland Park, Michigan, factory. But Ford’s flow experiments had already begun before the Model T was introduced in 1908.

In 1906, to meet expanding sales of the Model N automobile, Ford engineers began arranging machine tools for the fabrication of engine and transmission parts in the sequence of processing steps, rather than grouping them by machine type, as was then common practice. For example, if a heat treatment was required, then the heat-treat oven would be located directly between the previous and next machining steps, rather than in a separate oven area. The result was considerably higher productivity. Over the next few years, Ford strove to apply this sequential processing concept to the production of many different fabricated parts.

At that time, Ford’s various assembly processes (engine, transmission, axle, magneto, dashboard, final assembly, and so on) were still set up as stationary tables or stands on which a whole item was assembled, typically by a single person who fit all the parts together. Even when Ford moved its parts fabrication and assembly processes to the Highland Park factory in 1910, the primary assembly approach remained stationary tables and stands.

By 1913 the Highland Park factory still could not meet the runaway demand for the Model T; more orders were coming in than cars going out. Ford engineers, seeking ways to fill those orders, established their first sequential and moving assembly line for subassembly of the flywheel magneto. After a few weeks of experimentation and fine-tuning, the productivity of this process was increased fourfold.

You can imagine the enthusiasm with which Ford’s engineers then worked to spread this sequential, flowing, and often moving-conveyor based assembly approach to the many other assembly processes at Highland Park, including the famous final vehicle assembly lines.

Putting It All Together

By the end of 1913, Ford had more or less the following situation in its Highland Park factory. The upstream parts-making processes (stamping, machining, etc.) had been arranged in the order of processing steps for some time. As indicated in Figure 4-1, the various downstream assembly processes (engine, final, etc.) were now also being put into sequentially flowing line arrangements.

Furthermore, there was also only one product being produced, the Model T, which meant that no changeovers were required. Except for a few different body types, all other parts on every Model T in production were the same.

What would Ford’s next step be in this situation?

With their successes in making both fabrication and assembly processes flow, and since they were only manufacturing one product, Ford engineers tried to take flowing production to its logical conclusion: Why not connect all processes in one contiguous flow from raw material to finished product (Figure 4-2)?

We were not there and we cannot interview the Model T era Ford engineers to ask them about this, but they did leave us an exoskeleton of their thinking with the unusual, still-standing six-story buildings at Highland Park. These buildings (one of which is depicted in Figure 4-3 in its original elevation drawing) were added to the Highland Park factory complex in 1914, and Model T–related production took place there until 1919.

Figure 4-2. Connecting it all into a single flow 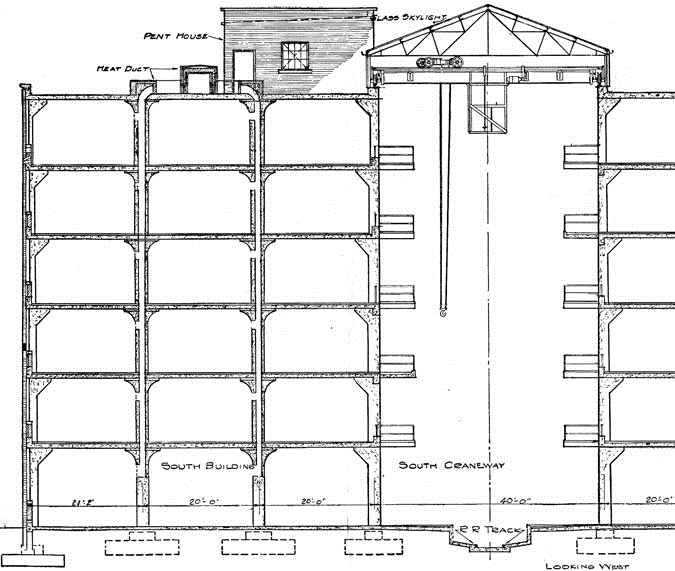 The concept behind these unique buildings was that final assembly is on the ground floor, and subassembly and parts fabrication processes are on the upper floors. In those days, materials were brought to factories by rail, and as you can see in the elevation drawing, railroad tracks went down the center craneway of the building. In the craneway, material would be hoisted from the railcars onto balconies that opened to the appropriate floors.

At this point I’ll let Mr. Edward Gray, Ford’s chief construction engineer at the time, describe the rest of the material flow in these buildings, which he designed:

In doing some secondary research for this book, my colleague, Jim Huntzinger, and I became fascinated with Ford’s six-story buildings at Highland Park, and this statement in particular. Once we had read Edward Gray’s testimony in the Ford Tax Case files at the Detroit Public Library, it seemed that the assertion of Ford’s Model T era engineers striving for one contiguous flow could only be confirmed by seeing for ourselves the holes in the floors of the six-story buildings.

Imagine how disappointed we were when we could not find even one hole in the floors as our Ford hosts kindly walked us through the nowunused six-story buildings. Fortunately, we had an astute University of Michigan Ph.D. student with us, Eduardo Lander, who suddenly realized, “These floors are 90 years old and have probably been resurfaced many times. We should be looking at the ceilings, not the floors.” And as we looked up, there they were, plain as day, lots of patched holes.

Ford’s six-story building experiment was ultimately not a success and the concept did not spread. We can speculate that the two cranes in each craneway—for unloading materials from the railcars—would have been a serious flow bottleneck. Transferring parts through holes in a reinforced concrete floor must also have been quite inflexible, since changing a machine layout could mean having to patch one hole and jackhammering open a new one.

There was also still plenty of work-in-process inventory in the Highland Park value streams; in all the different conveyors, chutes, slides, barrels, etc., transferring components between processes, and often between individual processing steps within one process too. Ford was still a long way from the ideal of a 1×1 flow from A to Z, but that misses this key point: whether consciously or not, by striving to continuously improve the production flow toward an ideal of one connected flow, the early Ford Motor Company was utilizing a vision and interim target conditions in a way that highlights critical obstacles and makes them something to be worked through rather than circumvented. This is surprisingly similar to how Toyota’s improvement kata utilizes a long-term vision and interim target conditions to manage people and move the organization forward. Ford’s story has been told many times, but from a management and organization behavior perspective, we have missed this point.

End of the Flow Experiments

After the six-story buildings Ford made one more big attempt to connect all processes from raw material to finished product, at the integrated, horizontal layout River Rouge factory complex. The Model T completed its production run there from 1919 to 1927. But by the mid 1920s customers were less willing to keep buying the same Model T. The number of different product variations began increasing, while the lifespan of any one model decreased.

These two new demands on the factories—higher variety and shorter product life span—made it much more difficult to try to synchronize the production flow compared to the one-product Model T days. Some processes in the value stream now had to produce different versions of an item and change over between them. Say, for example, a crankshaft machining process that had produced only one crankshaft for the Model T would now have to produce a few different crankshafts for a few different engine variants. Ideally this machining process would change over at the same time the engine assembly process changes over, in sync, but this is difficult because a machining area often feeds more than one assembly process and has significantly longer changeover times.

In this situation there are two basic options. The challenging option is to continue pursuing the “one contiguous flow” vision. This requires tackling and working through the admittedly difficult obstacles to a connected, synchronized flow and developing new solutions. The easier and quicker option, on the other hand, is to move away from the synchronized flow ideal, decouple the processes in the value stream from one another and operate them as islands.

Generally speaking, after the Model T, manufacturers increasingly chose the decoupling option. Besides the increasing product variety, another reason for the move away from pursuing the flow ideal may have been that, around 1924, the production capacity of the U.S. automobile companies finally began to match the demand level. Orders were no longer outpacing capacity, and this conceivably reduced the urgency to keep striving for further flow and productivity improvements.

Another reason was that General Motors struck out in a new direction with its new management approach, and it, no longer Ford, became the company to emulate. As the Model T era came to a close, it seems that so did focused experiments to keep improving factory flow, and the associated improvement kata style behavior. Pursuit of the one contiguous flow ideal went dormant again, until Toyota took up the mantle in the 1950s.