One of the most common early target conditions with production processes, as well as again and again after process changes are introduced, is to establish stability as measured by fluctuation in workstation cycles and output cycles. Most production processes I see are not operating in a stable condition yet.

What Information Is in a Target Condition?

A target condition describes a state that we want to have reached at some future point in time, on the way toward a longer-term vision. There are both technical and nontechnical target conditions, since the improvement kata has application in a wide range of situations. At least some aspects of any target condition should be measurable, however, so that you can tell if you have reached it or not.

Engineers, for example, often try to define target conditions in terms of solutions because that is what they are accustomed to working with. You have to learn to hold yourself back and first define where you want to go before you get started on moving there. Countermeasures, then, are what you develop as needed once the target condition has been defined and you are striving to move toward it, as described in Chapter 6.

Figure 5-29. Examples of what is not a target condition

What is the sequence of steps required to complete one cycle through the entire process, how long should each step take, and who is to perform that step?

Other attributes of the process:

These are metrics for checking the condition of the process in short time increments, in real time while the process is running, to help guide improvement efforts, such as: 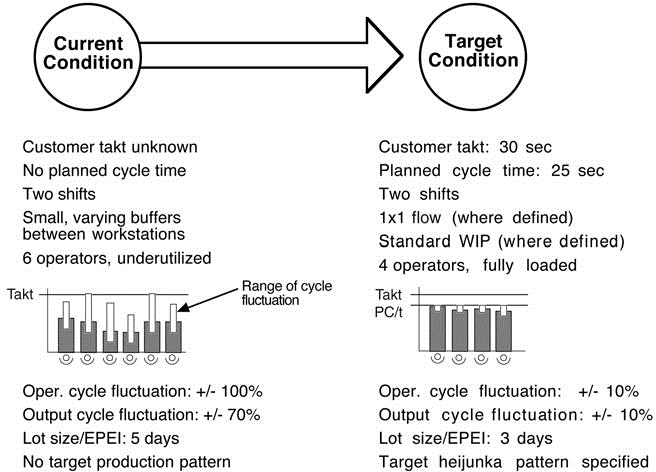 As you can see, manufacturing target conditions tend to define how a process should be operating to a greater level of detail than is currently the practice in many factories. As we will see in the next chapter, this detail creates a condition in which learning can take place.

At production processes it is sometimes possible to define in advance a detailed target condition, because the current condition can be observed, analyzed, and understood in detail. In most situations, however, it is not possible to fully see and understand the true current

condition right away, and thus not possible to define a target condition in full detail up front. For example, think of setting out to develop or market a new product. That is, you do not yet know the details about what customers want.

Caution is advised, for in situations where you cannot yet adequately discern the current condition—which is most situations—you may mistakenly feel confident that you do understand. We often don’t realize what we do not know, and can thus easily slip into specifying target condition details that are actually based on conjecture.

For example, at production processes, I have had good results by making close observations, establishing an initial target condition that defines the following, and then getting going (as described in Chapter 6):

For detailed guidance on defining these points see Appendix 2.

After a day or two of working at the process, we have usually learned enough about it to have defined a more detailed target condition. This frequently involves simply attempting to run the process as described in the initial target condition, as an experiment; that is, in order to see what happens. You might call this “further analyzing the current condition by getting going toward the target condition.” The approach of defining initial target conditions vaguely is in widespread use at Toyota, where it is considered bad form to specify in detail something you do not yet understand.

Do or do not.There is no try.

Defining some terminology can be helpful here. I call an initial, vague target condition a challenge, and once sufficient detail has been added, I call it a target condition. For example, the manager of an assembly area challenges his team to bring the machining of some die cast components, which is currently done in batches elsewhere in the plant, into the 1×1 flow at an assembly process. As the team studies the situation, develops a concept and perhaps even experimentally moves the machining center into the assembly process, it defines the further details that characterize a target condition.

How Challenging Should a Target Condition Be?

Knowing what is an appropriate target condition—a challenging but achievable stretch—depends on the situation and is an acquired skill. As you gain experience in using the improvement kata, you will become a better judge of what a particular process and people are ready for next. As I began to learn about and work with the improvement kata, I thought we would tend to make our target conditions too easy. In fact, we tended to make them too difficult. Why? Because when we do not yet understand a situation firsthand and in detail, we overlook or underestimate obstacles and thus may develop target conditions that are too ambitious for the allotted time frame.

For example, sometimes we jump to introducing a FIFO (first in, first out) flow through long stretches of a value stream, with the idea that this must be good because it is much closer to the ideal state. However, if a FIFO flow has a beginning-to-end lead time of greater than, say, one day, it may generate chaos as process conditions change while parts work their way through the long FIFO route. What seemed like more flow becomes disorder, because we tried to leap ahead too quickly rather then proceeding step by step.

Another example is cutting too much inventory too soon. Here again, the thought is that cutting inventory is good because less inventory is closer to the ideal state. However, too little too quickly and you generate chaos. The trick is understanding your processes, holding the right amount of inventory in a controlled fashion, and improving those processes step by step toward appropriate target conditions, so that, as an outcome, inventory can be reduced.

What Is the Time Horizon for a Target Condition?

One year. Some target conditions may reach a year into the future, which corresponds with the planning or policy deployment cycle in

Three-month maximum. I suggest that the maximum time horizon for a production-process target condition should be three months. If a target condition extends further than three months into the future, you should probably look at breaking it into more manageable increments.

What Is the First Step?

As you define a target condition, it will not be clear how to achieve it, but the next step should be clear. This is like “priming the pump.”

category in the Pareto chart was usually “other,” which put us back to debating opinions. By the time we decided what the biggest problem was, the situation at the process had changed. This effect is called Pareto paralysis, and I encourage you to avoid it. Pareto paralysis delays your progress as people try to determine the “right” first step to take.

Fortunately, such delay is easy to avoid, because it matters more that you take a step than what that first step is. Do not worry so much up front about finding the biggest obstacle before you begin. Take a step, and when you’ve done that, the learning process begins and you will see further. If you are moving ahead in fast cycles, I assure you that you will soon find the current biggest problem. It will be waiting for you.

A related point in many instances is that the next step may not involve a countermeasure, but rather, getting more information through observation, data, or experiment. As mentioned before, if you are unsure, then go and see; again and again if necessary. This has helped me hundreds of times. Most steps you take will not be countermeasures, but efforts to see deeper and get more facts and data.

In setting the next step, a tactic I use is to ask the same person who conducted the process analysis and established the target condition to also define the next step. This eliminates those “what is the first step” discussions. The idea is to get started and then see further (Figure 5-32).

Figure 5-32. Once you take a step the learning process begins

Something you can do immediately is an analysis to assess the stability of a production process, which can be a good way to begin grasping the current condition. Do this at an assembly or “pacemaker” process if possible. (A definition of “pacemaker process” is in Appendix 1.) With a stopwatch, pencil and paper in hand, position yourself at the last workstation in the line, select a point, and time how often a part comes by that point. Do this for 20 to 40 successive cycles, recording the time for each cycle.

Then move upstream and time the cycle of each operator’s work in a similar fashion. Select a single reference point in the operator’s complete work cycle, which is where you will start and stop your stopwatch. Let the stopwatch run until the operator returns to that point in the cycle, regardless of how long it takes. Do this 20 to 40 times for each operator. Graph the findings for each position you timed as shown in the example in Figure 5-33. Do not calculate or use averages, which conceal process instability.