Suppose we would like to teach a team of athletes some new skills and have them do well in competition. In this case, we would certainly not expect that simply explaining a different way of doing something, no matter how well that explaining is done, will be sufficient for altering their behavior. It is not possible to objectively assess one’s own performance and see what skills you need to work on. This is because we tend not to perceive our own habits and do not know what we do not know. In the case of athletes, we naturally expect them to practice under the observation and guidance of an experienced coach, and that the necessity of having a coach will not go away. If no one observes them and provides feedback, they can end up internalizing the wrong routines.

The Role of Leaders at Toyota

We now accept the fact that learning is a lifelong process of keeping abreast of change. And the most pressing task is to teach people how to learn.

Because the improvement kata is a set of behavioral guidelines, it is something that we learn through repeated practice. It takes conditioning to make behavioral routines become second nature, and consequently a lot of Toyota’s managerial activities involve having people practice the improvement kata with their guidance. For team leaders and group leaders, this teaching occupies more than 50 percent of their time, and for higher-level managers it can also occupy up to 50 percent. Developing people in this manner is part of a manager’s or supervisor’s evaluation, bonus, promotion, and salary.

Training While Working On the Real Thing

We may think of taking classes and seminars to learn, but Toyota thinks of working through actual improvement challenges as how one learns. There are some classroom training courses at Toyota, but to ensure that improvement happens and that people internalize the improvement kata the primary emphasis is on doing: managers and

Figure 8-1. At Toyota, training and doing are not separated

leaders at Toyota teach people the improvement kata by guiding them in making real improvements in real processes. This approach is not unlike skills training in sports, where “training” means athletes performing an actual activity over and over under the observation and guidance of an experienced coach.

By comparison, in many of our companies the concept of training seems to have devolved to classroom teaching and simulation exercises. Unfortunately, classroom training and simulations cannot ensure change, mastery, and consistency. Classroom training alone, even if it includes simulations, at best only achieves awareness. We can only discern what people are actually learning and how they are thinking— and hence what they need to learn and practice next—as they try to apply in real life what they are being taught (Figure 8-1).

Toyota does not make a distinction between learning the improvement kata and improving processes. Toyota’s teachers—that is, managers and leaders—observe and work with their students as those students are doing the actual activity day to day. Of course, as you might expect, at Toyota there is a kata for how managers and leaders do this.

Note: Labels and currentand target-condition circles were added by the author.

Everyone at Toyota Has a Mentor

Mastery is the objective of any kata, and even people at higher levels in Toyota are honing their skills and working toward that goal. Like the improvement kata, the pattern of the coaching kata is also practiced at all levels throughout Toyota. Each employee is assigned a more experienced employee—a mentor—who provides active guidance through the process of making actual improvements or dealing with work-related situations. That mentor, in turn, has his or her own mentor who is doing the same. It is the buddy system, or two-man rule, with one buddy being the mentor.

These mentor/mentee relationships are not necessarily linked to the organizational hierarchy. For shop-floor operators, their mentor is their team leader, who is in turn supported by the group leader. However, above these levels in the organization you may get mentored not only by your immediate superior, but also by someone else, who may be assigned to you based on your current activities and development needs. Over the years, you will have different mentors.

It easily takes 10 years of practicing the improvement kata and the coaching kata before both become so ingrained that one can be a good mentor. This is one reason why Toyota has in the past avoided bringing managers in from outside the company, and instead preferred to develop them from within. One of Toyota’s key challenges while growing rapidly is to have enough mentors.

A person’s need for coaching never goes away. Regardless of how much experience one has gained, it is unlikely that anyone can become so good at discerning the reality of a situation and applying the improvement kata that coaching will no longer be necessary. The intention is that both the improvement kata and the coaching kata increasingly become second nature (automatic and reflexive) as a person rises in the organization.

The mentor (coach) guides the mentee in applying the improvement kata through a back-and-forth dialogue over a period of time, which has sometimes been compared to a game of catch:

The mentor/mentee dialogue is utilized, for example, when a current situation is being assessed, when a target condition is being developed, and then when the routine of the five questions comes into play.

One key element in Toyota’s mentor/mentee dialogue is that the intention is for the mentee to figure things out for himor herself under guidance, which is a well-known teaching method. The dialogue often begins with the mentor giving the mentee a purposely vague assignment, need, or challenge. For example, the mentor may ask the mentee to have a look at a problem or situation, or suggest something like, “We should wash parts within the one-by-one assembly flow at this process, rather than in batches.” The mentor then asks what the mentee proposes. The mentee’s answer helps the mentor discern how the mentee is thinking and what input the mentor should give next. That is why the mentor’s assignment or challenge is often vague at the start—so he can see how the mentee is approaching the situation.

The mentee gives her observations or proposal, sometimes in bullet form in a single-page document (more on this later). After this is presented to the mentor, it is often pushed back to the mentee in the first cycle, with a suggestion such as, “Please think about this some more,” or simply, “Why?” This is only the first of several catch cycles, through which the mentee’s analysis and proposal become progressively more developed and detailed. Once the current situation has been analyzed and the target condition defined and detailed to the mentor’s satisfaction, then the mentee’s role becomes planning and carrying out PDCA cycles, also with the oversight of the mentor. In doing this, the mentee often has to justify actions to her mentor, and to define in advance the expected result of an action.

The point to remember here is that the mentor is asking questions of the mentee not to direct the mentee to a particular solution— although it may appear that way—but rather to learn what and how the mentee is thinking and how the mentee is approaching the situation. The mentor works to teach the mentee the routine of the improvement kata by providing step-by-step guidance, based on the mentee’s reactions and responses along the way. The mentor guides the mentee through the improvement kata, but in a manner that has the mentee learn for himor herself the routine and thinking inherent in that kata. The mentee is learning by personally gaining insight. The highest, though somewhat bittersweet, praise for a mentor is if the mentee feels he or she learned and achieved the target condition independently. As an aside, from my observations I can say that the mentor’s job is as difficult as the mentee’s.

A second, and clever, element of mentor/mentee dialogues at Toyota is that while the mentee is responsible for the doing, the mentor bears considerable responsibility for the results but should not give solutions to the mentee. This overlap of responsibility creates a bond between mentor and mentee, because if a mentee fails, then it is the mentor who will get the scrutiny.

If the learner hasn’t learned, the teacher hasn’t taught.

—Common expression, which is frequently used at Toyota

The mentee is the person who works on the problem, whereas the mentor’s task is to keep the mentee “in the corridor” of the improvement kata routine. This is what is illustrated in the Toyota picture of the two mountain climbers shown earlier in Figure 8-2. Of course, to be able to guide the mentee in this way, the mentor must also be looking at the situation and often thinking one step ahead of the mentee; but no more than a step ahead. The mentor works to bring the mentee into the behavior corridor prescribed by the improvement kata, but ultimately the mentor must accept the solution that the mentee develops. Leading the mentee to a solution would block the development of the mentee’s capability, that is, the purpose of the mentor/mentee dialogue approach.

A third element of the mentor/mentee dialogue is that it is not just learning by doing, but that people learn when they make discoveries through small errors (see Chapter 6). The mentor expects the mentee to make small mistakes in applying the improvement kata, and it is especially at these points that the mentee will learn, and that the mentor can see what coaching input is required. In other words, the mentor lets the mentee make small missteps—as long as they do not affect the customer—rather than giving the mentee answers up front. 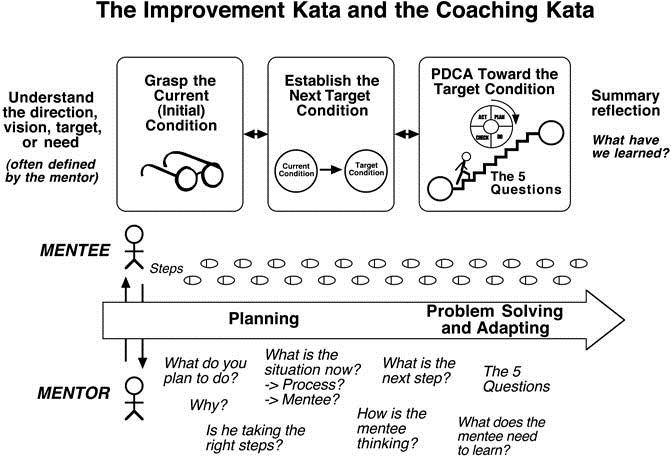 With the mentor/mentee teaching approach, as depicted in Figure 8-3, Toyota has developed a smart answer to the question of how an organization can teach its members the improvement kata and keep improvement going. The mentor/mentee approach has several benefits: