Cycles of coaching should ideally be frequent, short, and conducted face-to-face. In the case example, Tina and Dan’s communication was all verbal. However, it is often advisable to use a simple, one-page written document in support of mentor/mentee coaching. Verbal communication alone can rely too little on data, and during verbal communication a mentee may naturally, and unconsciously, adapt what he is saying to what he thinks the mentor wants to hear.

By asking the mentee to summarize information in writing on one page in advance of coaching, the mentor can more clearly see how the mentee is approaching an issue and how she is thinking. This in turn helps the mentor see the next step and what coaching is required at this time. Limiting the document to one page compels the mentee to be clear in describing her analysis and proposal.

Typical items in mentor/mentee dialogue that make it onto a written document include:

At Toyota such one-page documents are called A3s because they are often made on a sheet of ledger-sized paper, referred to as A3-size in many countries.

The format of an A3 generally mirrors the steps of the improvement kata. They are written in a succinct, bulleted, and visual style that tells a story with data. Although the A3 is typically on one page, there can be additional pages of backup documentation. It is the “story” itself that is built up and presented on the single page.

The format of an A3 varies depending on the purpose and theme.

Figure 8-8 presents the typical sections of an A3.

You may notice that in this example A3, “Current Condition” comes before the “Target Condition,” which is a reversal of their order in the five questions at the end of Chapter 6. The reason for this is that the five questions come into play after a target condition has already been defined, whereas an A3 is from the beginning, where understanding the current condition precedes defining the target condition. 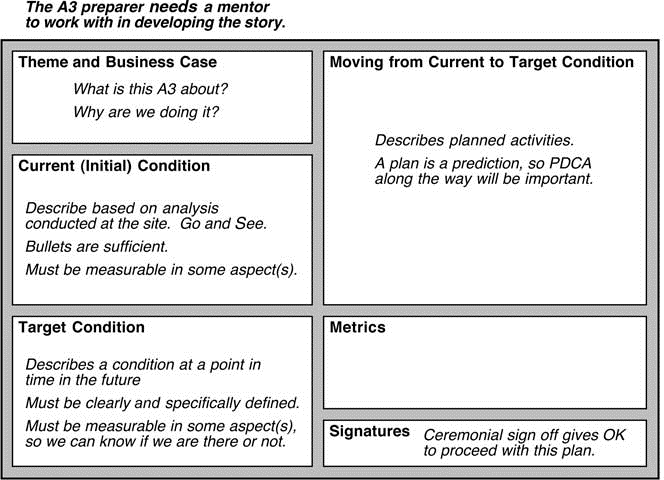 Purpose of an A3

The purpose of A3 documents is to support the mentor/mentee dialogue. This is done by:

It is surprisingly difficult to distill our understanding about something down to one sheet of paper. Preparing a succinct and precise A3 forces you to develop a deep and clear understanding of a situation.

Figure 8-9. An A3 can help mentor/mentee interaction stay focused

I would have written a shorter letter, but I did not have the time.

—Attributed to Blaise Pascal, Johann Wolfgang von Goethe, and others

This is another one of those instances where we can easily miss the point while trying to copy a Toyota practice. We tend to focus on the tool—the format of completed A3s that we see at Toyota—rather than on the less visible how and why an A3 is developed and used. Upon learning that Toyota utilizes A3s, some managers and consultants have singled them out as a lean tool and suggested that people use them. The result in many cases has been a lot of paper generation and not much more than that.

There is no magic in the A3 documents themselves. The trick is in how they are used, and here are some key points in that regard from our experimentation:

Much of the benefit of an A3 lies in this process of creating it, because it forces you to work with facts and data and think through what you are doing. The objective and benefit is not so much to have a completed A3, but to go through the iterative, step-by-step process of developing it.

For more on the A3 process within mentor/mentee dialogues, see the book Managing to Learn, by John Shook.